The Story of this Prayer Guide

With God's blessing, this Prayer Guide was on it's way to the printer exactly forty days after it was conceived! 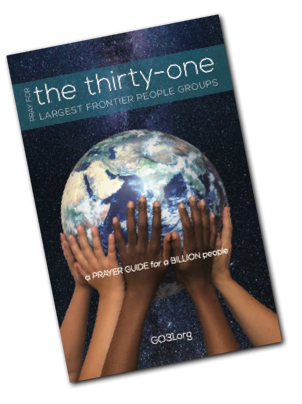 The prayer leaders were impressed with the realization that prayer for these 31 groups could rapidly accelerate the pace at which Jesus movements would also be started in the thousands of smaller Frontier People Groups.

These leaders sensed the Lord stirring them with this simple thought: thirty-one is a good number for a prayer guide! Through the eager collaboration of several ministries, the first edition of this prayer guide was on its way to the printer exactly forty days after the prayer guide was first conceived!

And as other ministries and networks heard the vision, they too wanted to express their support for this prayer guide.

"These leaders sensed the Lord stirring them with this simple thought: thirty-one is a good number for a prayer guide!" 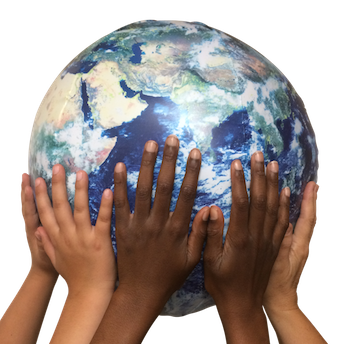 The development of the guide wasn’t without struggle, as we prayed and sought to accommodate a variety of perspectives regarding the cover.

Finally, the day we needed to make a final decision before printing 20,000 copies of the second edition, the editor and another prayer leader prayed for God to provide a way to implement the collective vision. By this time we had a clear graphic in mind, of children from a variety of races upholding the world in prayer. But internet searches for such an image all had the globe centered on the U.S.

That afternoon the editor and his family had planned an outing for their daughter’s birthday. They decided to fill some extra time before dinner by stopping in a toy store they noticed, and there from the ceiling was hanging a $15 “earth ball” perfect for the photo that had been envisioned. Sensing the Lord’s hand, the editor and his wife immediately bought one. Shortly afterward several children from different races walked into the store and honored a request for their arms and hands to appear in the photo. In just a few minutes, God had provided the image needed to complete the guide.

"In just a few minutes, God had provided the image needed to complete the guide."

"A variety of ministries immediately offered the prayer guide through their sites..."

A variety of ministries immediately offered the prayer guide through their sites, including Caleb Project, World Christian, Perspectives and William Carey Library, to name but a few. A large gathering of Indonesian prayer leaders provided the first international venue for distribution of the prayer guide, followed shortly thereafter by gatherings of prayer and mission leaders in Malta and Nigeria. Translations were quickly made in Spanish and Indonesian, while other translations have been urged to wait for the upcoming third edition.

God began answering prayer for God’s blessing on Frontier People Groups through Jesus movements even before the prayer guide came into circulation. As the available data has been circulated, the researchers who provided the data have been told that three of the original 31 groups already have Jesus movements, and will be replaced in the third edition. And the global count of Jesus movements we are aware of has risen from about 650 to more than 700.

"Translations were quickly made in Spanish and Indonesian."

God is up to something BIG!

When God plans a major advance of His purpose,
He often sets His people praying first (so the glory will be clearly His).

Will you join us in prayer?

Whatever you ask for in prayer, believe that you have received it, and it will be yours. (Mark 11:24)